Denver Johnson took the reins of the Missouri Southern State University football program on April 1 and has since hit the ground running.

However, there’s a side of him that few may know.  He is, as he says, a “gear head.” If you can pour gas in it, it goes fast and makes loud noises, he’s interested.

Over the years, Johnson’s wife, Danita, and daughters – Taylor, 26, and Kelsey, 24 – have come to accept his hobby.

Johnson says his first car was a 1953 Chevy pickup. The truck was a six cylinder with a three on the tree; the passenger’s side floorboard was rusted out.

“The first ‘good’ car that I ever bought was a ‘66 Mustang,” he says. “Not long after that, I had worked and saved up some money, made a trade and got a 1955 Chevrolet. I would give anything to get that car back.”

Over time, the collection grew. A few years ago, Johnson says he had more than 40 cars. Some were “barn finds” – cars kept pristine for years in barns.

Johnson says one of the real joys of having his cars is working on them and getting his hands dirty.

“I have a 1970 Plymouth Superbird Daytona, a 1969 Charger and a Hemi Barracuda. The three of those are the trifecta of muscle cars. The favorite of all those is the Charger. It was a barn find of mine.” 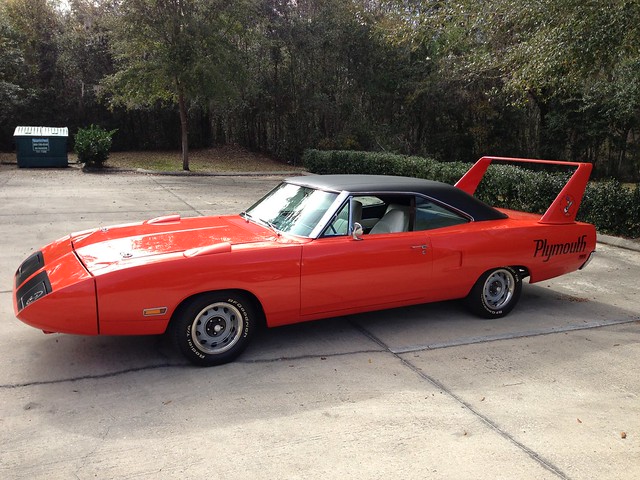 Johnson says the Charger was owned by a soldier killed in Vietnam and he purchased it from the boy’s parents. He told the couple that once he was done restoring it, he’d offer the car back to them to re-sell. However, the soldier’s mother, although very touched, said it was where it should be with Johnson now.

“You know, I have a Corvette, but they’re not really made for taller guys. If I could get into one, I’d probably have a dozen of them and be completely bankrupt.”

He also collects boats and motorcycles.

“I have a favorite bike (Harley Davidson CVO Road Glide) because it’s one that my wife Danita and I can ride together.”

One of the most fun to drive in his collection, Johnson says, is his 1987 Buick Grand National.

“That car (Grand National), isn’t perfect cosmetically, but it is really fun to drive,” he says. “It is really fast.”