For many of those in attendance, it began with a literal walk down memory lane.

As more than 150 former students and guests gathered for the first-ever Joplin Junior College Reunion on March 31, some took the opportunity to get reacquainted with their former school. The event began with a historical presentation at the Memorial Education Center at 310 W. Eighth St. – a building which served as home to JJC when it opened in 1937, and again in later years before transitioning into a four-year school.

“I have a lot of good memories of here,” said Nancy (Smith) Damer, ’60, as she walked the halls before the start of the program.

She recalled some of the names of teachers who left their mark on her and others. There were piano and voice lessons with Merrill Ellis and Oliver Soveriegn; English classes with Cleetis Headlee; and history with Harry Gockel.

“Some of them were tough, but they were all very good teachers,” said Damer. “I feel like JJC sent a lot of us into new territory. I know people who went to school here who have done marvelous things with their lives.”

Seated in the auditorium before the start of a historical presentation, Ron Folle, ’62, recalled studying psychology and sociology at JJC before entering a Lutheran seminary in Illinois. He attended the reunion with his wife Carol (Smart), who graduated from JJC in 1964.

“It’s been so long, but I remember this auditorium,” he said. “And we were just talking about where the cafeteria had been. If I remember, it was down on the first floor on the east side of the building.
“It’s fun to come back.”

Brad Belk, director of the Joplin Museum Complex, presented “Snapshots of Joplin” – a visual presentation of photos of the college and familiar locations from downtown and beyond.

“Hopefully these photos touch on a special, more carefree time in your lives,” said Belk.

Following the program, reunion activities – including a social hour and dinner – resumed at the nearby Scottish Rite Cathedral.

Jim Krudwig, ’66, took a moment to page through old yearbooks on display during the social hour.

“I would have to show up for 8 o’clock accounting classes, and I still use some of the knowledge today,” said Krudwig, who went on to work for Eagle Picher and later taught business classes at Missouri Southern.

He was unable to find his picture in the yearbook. It’s possible that the photo sessions were early and he just didn’t make it, he said with a laugh.

“You know how it is when you’re a college student trying to make that 8 o’clock class.”

Across the room, Paul Wetzel, ’54, was also reminiscing while looking through a yearbook.

“I moved to Joplin from Chicago in 1950. My parents bought a bakery and cafeteria at 716 Main St.,” he said. “It was right off Route 66 … the main drag through the United States. I learned a lot there and worked hard. During the lunch break at school, I’d run to the bakery to be the cashier in the cafeteria. It was a busy place.” 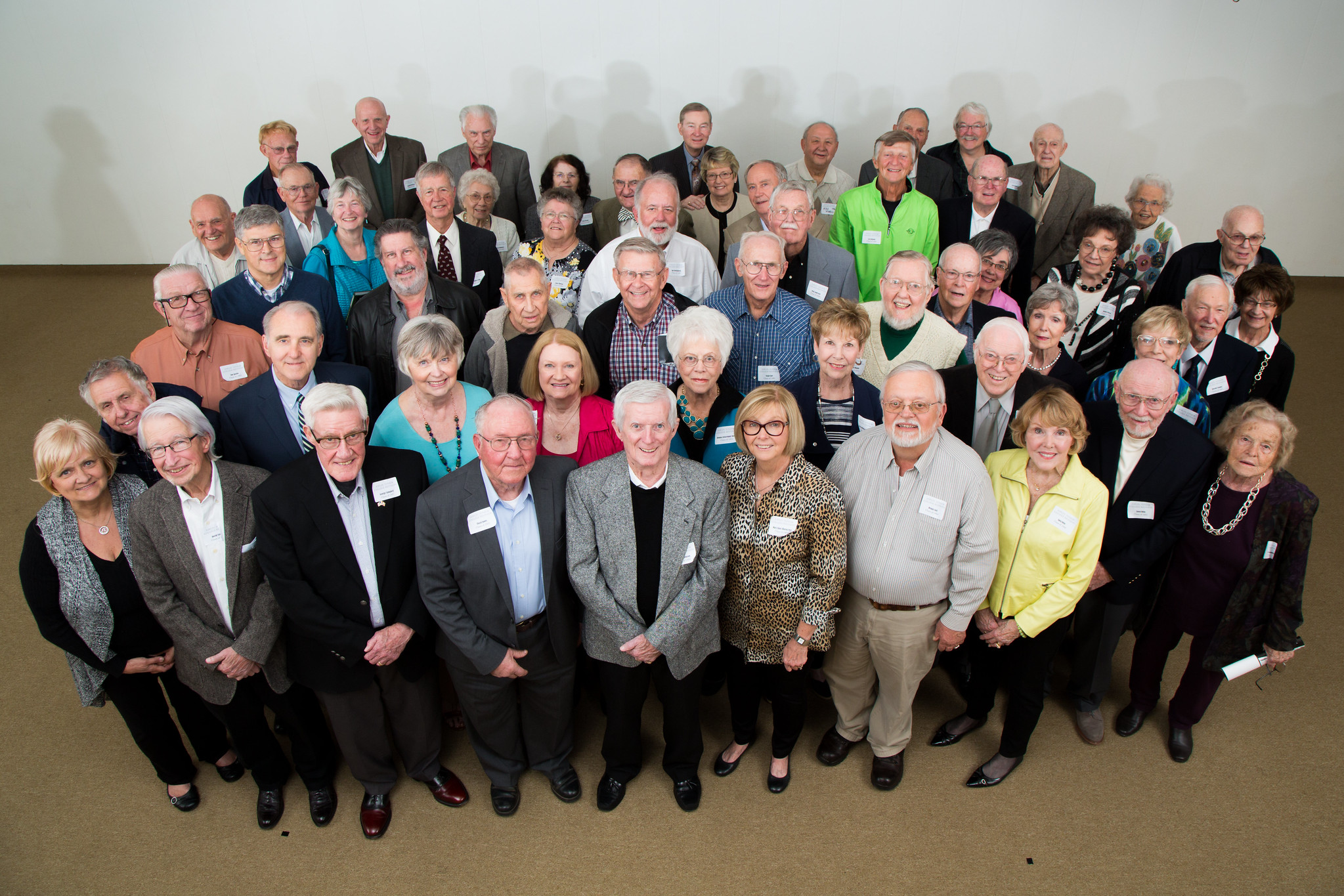 Wetzel studied pre-law at JJC, later graduating from law school at Pepperdine University in California and is still a practicing attorney today in Sedona, Ariz.

As he turned the pages of the yearbook, he remembered being inducted as a member of the Phi Theta Kappa Honor Society and performing in the Joplin city orchestra. He stopped on a particular page, pointing out a picture of his first girlfriend – a young woman by the name of Eleanor Damer.

“She passed away, but I didn’t find that out until years later when I came back here for my high-school’s 50th anniversary reunion,” he said.

After an introduction, Wetzel was soon reminiscing with Nancy Damer, who said that Eleanor was her husband’s cousin. It was one of many connections made during the evening.

Following dinner, the evening continued with a video welcome by Dr. Alan Marble, president of Missouri Southern State University, and another presentation by Belk.

Remarks were also offered by Dr. Larry Martin, a ‘62 graduate of Joplin Junior College who later returned to his alma mater to teach mathematics. He spoke of what made the JJC experience so memorable, and how those early years helped shape the four-year institution that followed in its wake.

“One of the definitions of ‘legacy’ is something that is handed down from an ancestor or predecessor from the past,” he said. “There were 114 students in the first Joplin Junior College class. You and I are part of their legacy.

“In the fall of 2016, there were 1114 graduate students enrolled at Missouri Southern State University. My friends, those students are our legacy … yours and mine.”