It’s typically a project undertaken by a post-doctoral researcher, a few graduate students, and one that can cost thousands (even tens of thousands) of dollars. But Dr. David McKee – an assistant professor of physical science at Missouri Southern State University – and three undergraduate students have created a particle detector with not much more than $700, a bit of ingenuity and a do-it-yourself approach. It’s a combination that has attracted attention from such organizations as Inside Science and Popular Mechanics and could result in an affordable design that other schools can utilize as a teaching aid.

“You can get a radiation-monitoring app for your phone that uses a camera chip to give you a rough idea of the radiation environment,” says McKee. “It’s pretty clever, but it doesn’t tell you what kind of particle it was or how energetic it was. I wanted to try to do better.”

Using a Sony A3000 digital camera chosen for its low light sensitivity, McKee and three of his students – junior physics and math major Kristina Pritchard, senior physics major Shemiah Khopang and junior physics major Chase Garrett – set out to see if they could modify the device into a ring-imaging Cherenkov detector that could measure subatomic particles.

“How ring imaging works, essentially, is that you need a radiator – a medium in which subatomic particles can pass through,” says Khopang.

McKee says that when such devices are built for particle physics experiments, they tend to be larger – a meter squared isn’t uncommon.  But the radiator used for the camera was considerable smaller – not quite 3 square centimeters.

“It sounded like we were reaching for the stars on this one,” says Pritchard. “We took (the camera) apart and back together again at least 20 times.” 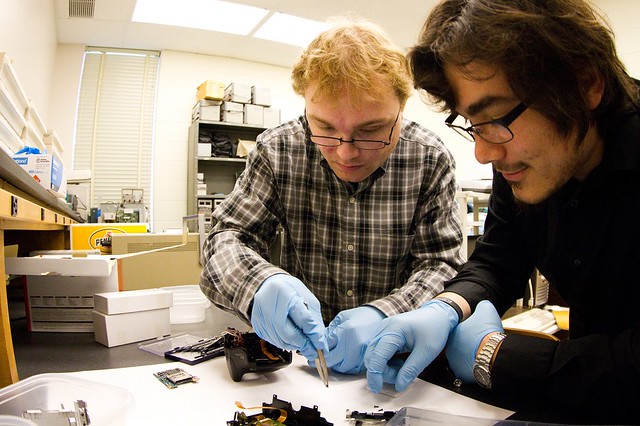 Modifications made to the camera included replacing the glass lens with one made of magnesium fluoride, which subatomic particles known as muons (“Like an electron except 200 times as massive,” says McKee) pass through and create Cherenkov radiation that could potentially be captured by the camera.

“The easiest way to explain it is that it’s the light equivalent of a sonic boom captured by the camera,” says Garrett, explaining the changes in speed that create a cone of light visible to the camera’s detectors.

It was a matter of trial and error to assemble the particle detector – and some extremely good luck in tracking down a supply of extremely hard-to-find 1.7 mm screws – but the camera was able to successfully capture the Cherenkov radiation emitted as a particle passed through.

Earlier this year, Pritchard discussed the project during an American Physical Society meeting in Baltimore, Md. “The press pretty much lined up (to talk about it) after it was over,” she says. “They were impressed that we made a particle detector for such little money.”

Pritchard also penned an article about the project for the summer issue of The SPS Observer, the magazine of the Society of Physics Students.

While essentially an experiment, McKee says it is one that provided his students with valuable research experience and that still has plenty of practical applications.

“We have a few other projects we might be able to do with it, such as taking it underground and measuring the rate at which the muon flux is shielded by the earth above,” he says. “Another possibility is that if we can automate that data-taking, we may take it into a cave system and look up at the roof at different angles to try to find the hollows in the rocks between the surface and where we put it – a project called muon tomography. That’s somewhat ambitious, but we may try it anyway.

“Long term, I’d like to use this to build a board which has a sensitive light detector and radiator in it and then create plans or constructed devices that can be sold to other schools as a teaching aid.”