Sticking with It: Jaron Lamar Davis returns to Missouri Southern with jazz trio

Speaking to a group of college musicians gathered for a master class in Webster Hall’s Corley Auditorium, drummer Jaron Lamar Davis explains his role in a jazz trio.

“It’s a conversation that’s taking place,” Davis says, still sitting behind his kit. “You want to be as authentic as you can be to that moment.”

The April 16 visit by the Joshua Espinoza Jazz Trio, featuring Davis on drums, marked a homecoming for the former music student. Following the master class, the trio offered a free evening performance.

He’s been playing the drums since a young age, but football was initially on his mind when coming to Missouri Southern.

“But I made an executive decision and decided to save my limbs and focus on music,” he says. “I learned a lot … mainly under Dr. Phil Wise (director of jazz studies). He’s not a drummer, but he has a way of being able to deliver and help you learn the things you need to learn. That’s the sign of a master teacher.

“It’s been five years since I left his teaching, but I carry all of it with me and use it almost every day.”

In 2015, he took a job performing on Branson’s Showboat Branson Belle, where he stayed for nearly three seasons. 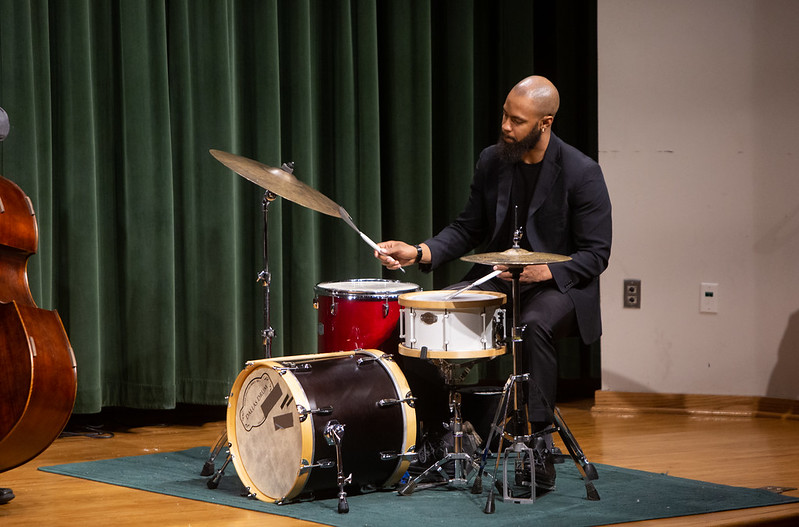 “I had auditioned there the previous year,” says Davis. “Their drummer decided to relocate so they brought me back in and I nailed the audition. I started two or three days later, with a lot of music to learn and not much time. It was a good pressure cooker.”

He eventually moved to the Washington, D.C./ Baltimore metropolitan area. It was there that he met pianist Josh Espinoza and bassist Mikel Combs, who were also recent transplants to the area.

“It seemed like the universe just came together because we all moved there within about a month of each other,” says Davis. “Josh happened to be at a jam session where I was playing. He came up to me to say how great I sounded and that he wanted to play with me.

“Through playing together, we started delving out of traditional jazz and into more of an exploratory thing.”

The trio recently recorded their first album, “Journey into Night,” which was released on June 14.

“The nice thing about this trio is that we have a unique synergy and understanding of one another,” says Davis. “He brought me and Mike in because of what we naturally already do.”

Espinoza says Davis brings a style that is “very orchestral” to the trio’s mix.

“Jaron really elicits all these different colors from the drum set that you sometimes don’t hear from drummers,” says Espinoza. “I feel like what we do is to try and tell a story through music. There’s a lot of ups and downs happening.

“He’s able to tune in and enhance it with the way that he plays, instead of just setting a groove and sticking with it the whole time. He’s able to put that aside and play the drums almost like a melodic instrument.”

The trio has played at a number of festivals and house concerts, but Davis says the opportunity to come back to Missouri Southern to perform was especially meaningful.

“The students here are learning and having the same struggles I dealt with,” he says. “I love being able to come back and show what’s possible when you believe in yourself and work hard.”

In 2018, Jaron Lamar Davis recorded original music he had written as well as a few jazz arrangements for his debut as a bandleader, “My View Through the Lens of Music.”

“I arranged them in a way that meshes with my own personality,” says Davis. “It’s jazzy, but there’s funk and soul as well. I didn’t initially record it for others … more so to get it off my chest. But to my surprise, a lot of people have enjoyed it.”

The album is available for purchase on Amazon, and can be streamed via Spotify and Apple Music.