It’s a late summer morning on the Lomah Dairy farm. The dairy’s large red barn with a white roof sits just across the state line in Oklahoma, a few miles south of Seneca, Mo.

Outside, a symphony of sorts is going on. Thousands of cicadas drone together in the tall maple trees, the sound slowly fading away. Then, a moment later, their leitmotif begins again.

The dairy is owned and operated by the family of Dr. Donna Johnson, associate professor of biology and environmental health at Missouri Southern and coordinator of the Yours to Lose – Advanced Medical School Acceptance Program.

The Johnsons live next door to the dairy in a large country house. She and her husband, Stanley, their children and several employees work at the dairy.

The cows have to be milked at 6 a.m. each morning and again at 5 p.m. in the evening. Cheese has to be made, flipped and processed. Milk has to be labeled, bottled and loaded.

Following milking, the Johnsons’ Jersey heifers come outside to feast on weed-free alfalfa. The animals are clean, compact and bright-eyed. They drink from a stock tank filled with natural artesian spring water. Goldfish have been placed in the tank to consume algae in the water.

Lomah is an acronym for “Land of Milk and Honey,” a reference to a passage from Isaiah:

“ . . . because of the abundance of the milk produced he will eat curds, for everyone that is left within the land will eat curds and honey.”

“At one time we sold honey, too,” Johnson says. “That ended when honeybee population began to decline and our bees died several years ago.”

The Johnsons, devout Quakers, sent their children to a private Mennonite school.

“We wake up and we work all day long all day,” Johnson says. “Our children have a strong work ethic. They have an hour or two to do homework and then its chore time.”

Son Will, 18, and daughter Grace, almost 17, still work on the farm. Another son, John, 20, graduated from college and works as a diesel mechanic in Pennsylvania.

Johnson, a strong woman with a friendly smile, grew up on a farm near West Plains.

“The vets would come out to the farm every once in a while. I thought when I was just a little girl, ‘This is the career for me.”

Johnson followed through. She first attended MSU, then received her doctorate in veterinary medicine from the University of Missouri-Columbia.

Stanley is also a veterinarian. The two met while working in northwest Arkansas. It was there that Donna developed a special interest in zoonotic illnesses –those that normally exist in animals but can infect humans, too.

A few years later, she began to teach at Missouri Southern, initially on an adjunct basis. Later she became full-time. Over the years, she has taught microbiology, anatomy and physiology, food safety and epidemiology. 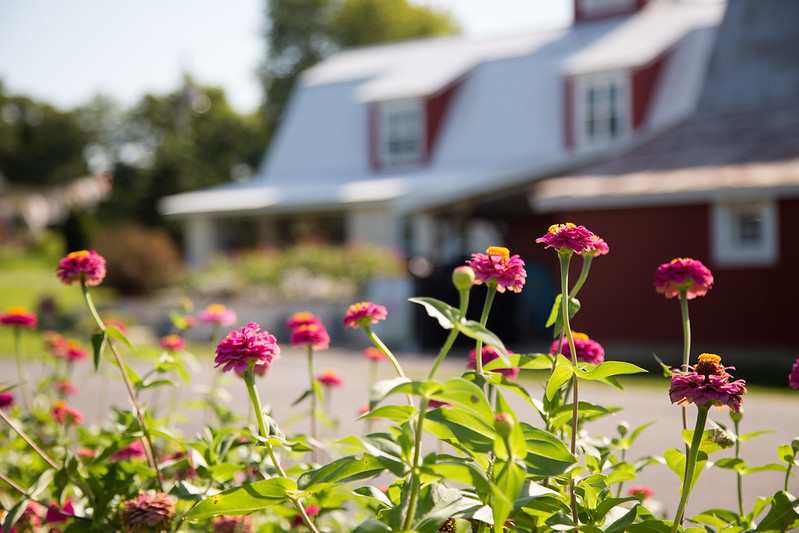 The Lomah Honor store offers customers the chance to come in, choose the milk, cheese and yogurt product they want from a refrigerator and put their money in a slot on the wall. There is no cash register, no checker.

The honor system has worked well. “We could probably count just three or four times in the last 15 years when someone hasn’t paid for something,” Johnson says.

A display case features a picture of “Baby” – Lomah’s “Cow of the Month.” A handwritten caption says the three-year-old Jersey loves exploring and feeding on pansies.

In order to keep within Oklahoma regulations, dairy sales only take place in the Sooner State.

The Lomah products are sold in Reasor’s Foods in the Tulsa area, at the Coffee House on Cherry Street and Topeca coffee shops in Tulsa, and at the Pioneer Woman Mercantile in Pawhuska, north of Tulsa in Osage County.

Several years ago, Johnson put on a new hat when the dairy decided to produce cheese.

She threw herself into the study of the effort which she calls “part art and part science.” She studied the cheese-making process in Vermont and Maine. On a trip to Canada she concentrated on the sanitation and cheese-room microbiology as well as affinage, the art of ripening cheese.

“Our top priority is to have wholesome, safe products,” she says.

This fall, in addition to her work at Missouri Southern, Johnson will be teaching a class on zoonotic diseases at the new KCU Joplin medical school.

It’s just another day in the land of milk and honey.

Yours to lose offers jump-start on medical school

The Fall 2017 semester marks the start of the first Yours to Lose cohort, with the incoming group of freshmen preparing to get a jump-start on their journey to becoming physicians.

The program guarantees up to 25 incoming freshman acceptance at the new Kansas City University of Medical Arts and Biosciences (KCU) medical school in Joplin at the same time they are accepted to Missouri Southern.

After three years of classes at Missouri Southern, students will receive their bachelor’s degrees in biology from Missouri Southern and then enter medical school. One advantage is that the students in the program will not have to take the Medical School College Admission Test (MCAT).

“We already have a very strong pre-med program,” says Johnson, coordinator of the Yours to Lose program. ‘‘Yours to Lose’ is just a small portion of that. We have different routes – the traditional four-year routes and students who already have a bachelor’s degree who are taking the pre-requisites to apply to medical school.”

What kind of student makes a good pre-med or medical student?

‘The most qualifying characteristic is a devotion to their studies,” Johnson says. “They jump into the world of science and make the most of it. The dedicated students have a lot of drive.”

She says Yours to Lose opens the door for the possibility of shared classes, research opportunities and specialized courses between Missouri Southern and KCU. The benefits for the community could be far-reaching as well.

“One impetus for the medical school being here was to increase the number of physicians in the area,” she says. “We’re hoping that’s what will happen.”