The massive snake is estimated to have been dozens of feet long, and able to exert between 200 and 400 pounds of constriction pressure per square inch.

Be happy you weren’t around to take a stroll during the early Cenozoic Era. If it were to have gotten ahold of you … “You’re not going to make it,” says Dr. David Penning. “If you take what exists today and estimate what the Titanoboa could do, it would be the equivalent of an Abrams tank sitting on your chest.”

Penning, an assistant professor in the Department of Biology and Environmental Health, recently lent his expertise in the snake world to “Secrets of the Dead: Graveyard of the Giant Beasts,” which aired on PBS in November. Penning and other researchers focused on reconstructing the Titanoboa cerrejonensis and how it would have behaved.

“It’s an extinct snake from about 65 million years ago,” says Penning. “The question was, ‘How does that animal work?’ There’s nothing that size today … not even close. But we do have a range, which can help us predict what Titanoboa might have been able to do.”

It’s not the first time the instructor – who joined the faculty at Missouri Southern in the fall of 2016 – has been tabbed to share his knowledge of snakes and other members of the reptile world. His interest in the subject stretches all the way back to his youth, growing up in Lawson, Mo.

“Honestly, when I was younger, I was a little scared of (snakes),” he says. “But I was intrigued by them. They don’t have arms, they don’t have legs, but they’re everywhere and they’re dominant predators. As a kid, I was really confused by that. “How do they crawl? How are they going faster than me? And how can I not catch them?”

Originally, his graduate studies were headed in a different direction. The pace, however, proved to be a bit slower than he would have liked.

“The initial plan for my master’s degree was to look at the way tortoises grow, and how they grow differently in captivity,” says Penning. “It turns out that doing a project on a slow-growing species in a time limited to two years is probably not the best way to do it.”

Still, he has four tortoises that he keeps as pets. He admits they’re not for everyone.

“They generally don’t make good pets for people who aren’t ‘allin,’” he says of the species, which can live upwards of 200 years.

“It’d be like a dog that is really high maintenance and will always be there. “They’ll go in my will, so hopefully my kids – when I have them – will really like tortoises.”

Snakes and other limbless reptiles remain his primary focus, as well as a subject of intense fascination.

“As far as movement, snakes externally look very simple,” says Penning. “They’re a tube with a head and a tail. But internally, they all have roughly 15,000 to 20,000 muscles. The complexity is absolutely crazy. They have about 200 to 250 vertebrae and two ribs on each. It’s the muscles pulling back and forth that allows them to move. They can use their belly scales as little shovels, allowing them to move, or they can push against things or sidewind.

“Engineers would love it if we could identify which muscles are active when they’re moving. They can’t model snake movement very well because they don’t know what parts are pulling where in the real thing.”

His studies have also focused on snake strikes and the misconceptions surrounding them.

“For about a century, all popular literature and a lot of scientific literature continued to say that rattlesnakes and vipers are the fast ones,” says Penning. “Myself, my Ph.D. advisor and an undergraduate student were studying common black rat snakes … just common, harmless snakes … and filming them striking.

“We compared them with cottonmouths and diamondback rattlesnakes. Harmless snakes strike just as fast. In hindsight, it’s a thing that’s obvious, but no one had tested it. They all have to eat. They all have to defend themselves. It makes sense.”

In addition to his research appearing in peer-reviewed and popular publications, he has been featured on “Prehistoric Megabeasts: Croc vs. Snake,” which debuted last fall on the United Kingdom’s Channel 4 and the Discovery Channel’s “Daily Planet” program. The Discovery Channel visited Penning again in March to film a segment regarding his dissertation studies of how snakes eat other snakes that may be competitors for the same prey.

Also in March, Penning and Brad Moon, an associate professor at the University of Louisiana at Lafayette, published “How the Kingsnake Earned its Crown: Snake-Eating Snakes are Stronger than the Snakes They Eat” in The Journal of Experimental Biology. They measured constriction performance by 182 snakes from six species to determine why kingsnakes are able to generate higher constriction pressures.

While there are no boas or pythons to be found, Penning says the Southwest Missouri region has its share of snakes.

“There are black rat snakes, king snakes and bull snakes here,” he says. “There are a lot of native snakes that can constrict. I haven’t seen any yet, but there are a few different viper species around.”

Penning currently teaches biology courses for majors and nonmajors and eventually hopes to add herpetology and several other courses to the schedule.

“I already have three or four undergrads talking about doing research – venturing into turtles, bite force and all sorts of good stuff,” he says. 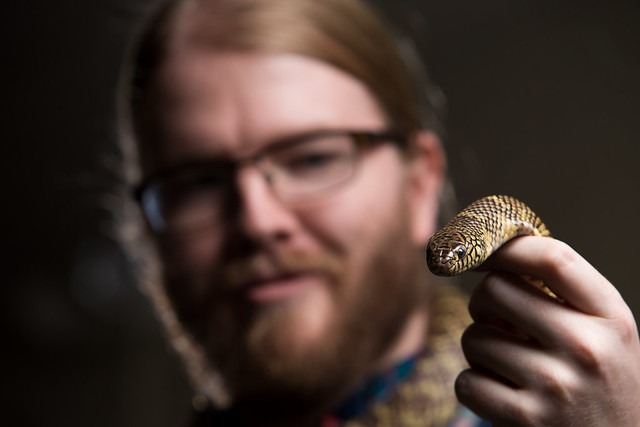 The presentations were “Hail to the King: Morphology and Performance of an Intraguild Predator and their Prey” and “The Scaling of Bite Force and Constriction Performance in Kingsnakes: Proximate Determinants and Correlated Performance.”