As she nears pro-fighter status, Autumn Roberts – a freshman criminal justice major from Springfield – is passing on her knowledge to others on campus.

The 18-year-old teaches a kickboxing class – a combination of karate and kickboxing – two days a week in Missouri Southern’s Beimdiek Recreation Center. Roberts says her interest in the sports emerged from being one of three adopted children among seven brothers and sisters.

“My mother wanted to do something to unify us as a family, so she enrolled us in taekwondo,” Roberts says. “My instructor, Richard Osborn, is a former kickboxer. He saw something in me and wanted to train me. That’s how it all began.”

Roberts says she trained for about eight months before winning her first competition. Since then, she has won two more.
Her parents and siblings have actively supported her efforts, while her younger sisters have worked as ring girls during competitions. She says the two sports provide structure and discipline. 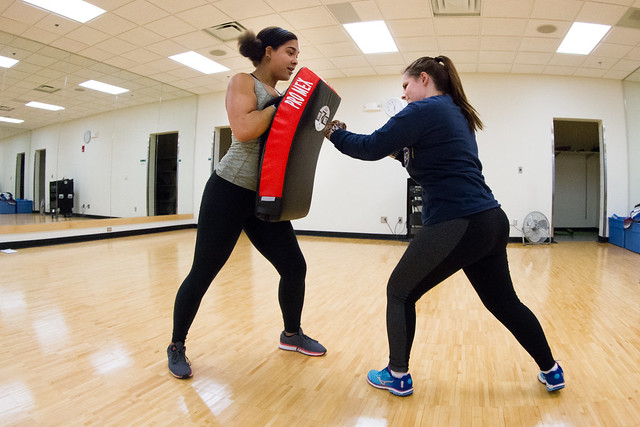 “I know I wouldn’t be in college today if I hadn’t started,” she says.

Roberts recently reached taekwondo black belt status. And with two more kickboxing fights, she could become a pro fighter. However, she thinks she will be happy in simply reaching that status and then turn to working on a career in criminal justice.

“The structure prepares a kickboxer mentally for handling any given situation,” she says. “We get in the situation and do sparring. It has greatly protected the students who then can defend themselves better.”

She says her youngest student is 2. The oldest is 74. Many of her students at Missouri Southern are international students who may not have the opportunity to obtain training in the sports in their home countries.

“Kickboxing is for really active people,” she says. “Taekwondo is for anyone and everyone.”