Little class on the prairie

Gathered near several cars and trucks parked off to the side, the students break off into two groups – one group carrying nets, the other bottles of a pink liquid – and set off by foot into one of the most endangered ecosystems in North America.

“It’s unique because there aren’t a lot of universities that have what we call ‘remnant’ prairies – land that hasn’t been plowed or modified,” said Jason Willand, professor of biology and environmental health. “Less than one percent of the original prairies remain.”

“We do some mowing to keep down the vegetation, but these 40 acres are unique to this part of Missouri.” 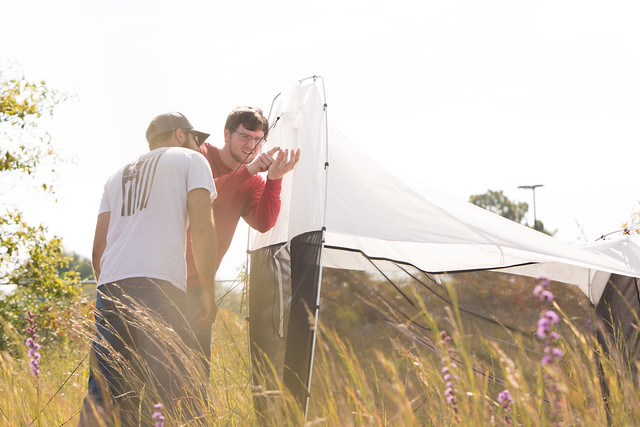 The unplowed, native tall grass prairie is part of only about 75,000 acres of such land still in existence in Missouri.

Such prairies are dominated by a unique assemblage of specially adapted grasses, Mima mounds, and herbaceous flowering plants. These prairies also provide a home to a wide variety of animals, insects and bird species for students to observe and research, as well as a small area of wetland.

The acreage was not part of the original Mission Hills estate that was purchased by the Jasper County Junior College District from owners Frank and Juanita Wallower in 1964. Juanita Wallower Carter and her then-husband, Proctor Carter, gifted half of the acreage to Missouri Southern in August 1978.The other half of the land was purchased by the college.

In February 2015, the Missouri Southern Board of Governors unanimously voted to permanently set aside 14 of the 40 acres for student use as a natural laboratory. An adjacent piece of land is also available for student use.

While students studying biology and environmental health have used the prairie land for their studies, it has also been utilized by other departments – including a plein air painting class.

“The features are undisturbed and it hasn’t been plowed. I don’t know if people grasp the concept that this land has been evolving and progressing over 10,000 years,” says Randy Haase, who spent more than 30 years with the Missouri Department of Conservation and now serves as the manager of Webb City’s habitation restoration project.

“The end result of this long period is that less than half of 1 per – cent of native prairie is left in Missouri and it’s one of the most endangered areas in North America. That’s what makes the land at Missouri Southern so valuable.”

Haase has spent time on Southern’s prairie to document the plants found there in order to gain a basic idea of their diversity.

“Missouri has developed a system where every plant has an assigned conservation number, ranging from 0 to 10,” he says. “A 0 can be found anywhere there’s soil, all the way up to a 10, which aren’t necessarily rare but are specific to where they’re found at. Between 4 and 6 is pretty common, but I found a few 7s and 8s out there.” 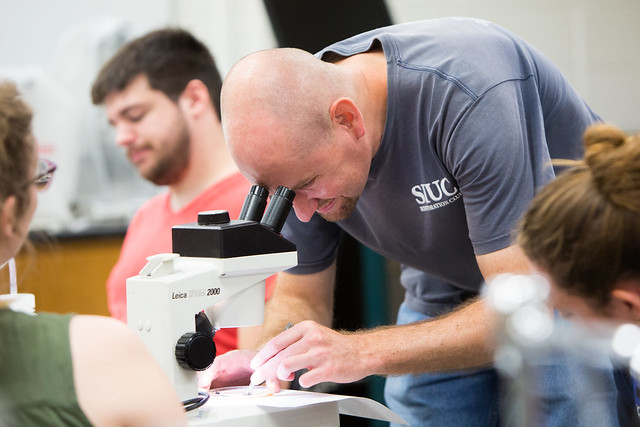 On this day, students are on a bug hunt, sweeping with nets and checking traps. Several mesh intercept traps are also set up, looking somewhat like abandoned tents but designed to draw in flying insects.

“We’re sweep netting to take samples of bugs that live out here on the prairie,” said Teddy Pashia, junior conservation biology major. “We’ll take them back to the lab, freeze them and see what we’ve got.”

“It’s a great learning experience, even if you’re not going into the entomology field,” she says. “And it definitely helps that you don’t have to travel somewhere to do a simple sweep net.” At the far end of the prairie, the second group of students uses the pink antifreeze solution to refill ground traps. “Ground insects walk across the pitfall trap, fall into the coolant and can’t get out,” says Lane Myers, a senior biology major who hopes to become a conservation biologist or game warden after finishing his degree. “This is really valuable for what I want to do.”