Students split up into pairs along the mats set up in the gymnasium, taking turns grabbing one another by the wrist, then putting their training into effect to remove themselves from the grip.

There’s smiles and laughter as they practice, but they realize the techniques being learned are serious business. The students enrolled in the Emergency Medical Services program at Missouri Southern are among the very few students in the country to receive Escaping Violent Encounters training as part of their education.

“We do this for all of our EMT and paramedic students every semester,” says Brett Peine, director of the EMS program. “We’re essentially giving them the tools they need if they get attacked on the job. It’s really all about preventing getting attacked, but they need the physical skills to be able to respond if they do.”

Peine says studies show that 50 percent of EMS workers report getting attacked on the job. However, that number is much higher in reality.

“I was attacked three times as a paramedic, but I didn’t report it,” he says. “For whatever reason, we’ve got it in our culture that it’s just part of the job.” 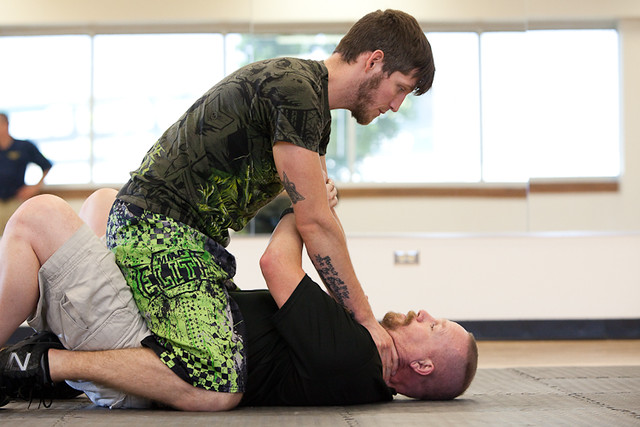 Madison Anderson, a junior studying to become a paramedic, is already employed as an EMT with Metro Emergency Transport System in Joplin. The Escaping Violent Encounters training helped prepare her for what she might encounter.

“You never know what house you might be going into or what kind of situation you’re going to roll up on,” says Anderson. “We’re obviously there to help our patient, but our priority is also to keep ourselves and our partners safe.”

Austin Triplett, a freshman EMT student, says the techniques they learn in the class are all about creating space between themselves and an attacker.

“The first thing we learned is we were not being taught how to hurt people,” he says. “The techniques teach us to de-escalate a situation and keep our distance.”

“We teach good verbal skills to de-escalate things, and talk about not being in an unsafe scene,” he says. “They need to learn the tools so if they do get attacked, this is how they can take care of it.”